Pinatex – Pineapple Leather The Fabric of the Future

Pinatex or in other words pineapple leather is about the change the whole leather industry. The plant based leather fabric is far superior when it comes to sustainability and longevity when treated correctly. Having a quite unique but similar texture to animal skin leather it takes way less resources and is more eco friendly. In the following article, I will focus on the production and sustainability aspects of pinatex and list the best products so far.

Piñatex® by Ananas Anam is the companies patented name for pineapple leather. It is a natural, non-woven material made from pineapple leaf fibre. The leaves are the byproduct of existing agriculture and fruit industry, which are are otherwise thrown away.

Piñatex® is a natural, sustainably-sourced and cruelty free material.

Dr. Carmen Hijosa developed this material after years of research and testing with her team in London U.K where the company is still based. After years of working in the leather industry she decided it was time for change and innovation.

First of all the production process is patented by Carmen Hijosa and can only be produced and supplied by Ananas Anam.

Piñatex®  is entirely made out of pineapple leaves. Everything starts in the Philippines, where local farmers collect pineapple leaves in order to make pineapple leather out of it. The pineapple industry globally produces about 13 million tonnes waste of which 40.000 tonnes are pineapple leaves, which usually are burned or rotted. Ananas Anam uses this pineapple leaves and extracts the fibre in order to create Pinatex. One part of the plant goes to the grocery store and the other part, instead of getting wasted, is processed to leather.

Decortication is the process called when the cellulose fibres of the leaves get extracted. This process still takes places at the farm in order to further reduce C02 emissions. Our partner Ananas Anam has development an own machine for this process, in order to help the farmers to get the most out of the pineapple leaves.

The biomass left over after removing the fibre is not wasted either. It is a very nutrient rich natural fertiliser for the soil. It basically gets used as a biofuel.

The extracted fibers now get washed and dried. After the fibers have dried, they are degummed (pectin gets released from the fiber). Pektine is the molecule that makes the leaves stiff. Once the pectin has been removed, the pineapple fiber becomes a soft and flexible, cotton-like material.

Thereafter, the fibers become a non-woven mesh by stinging thousands of needles into the fibers in an industrial, mechanical process to produce a felt-like structure. However, the process is the base of Piñatex®.

Then the raw Piñatex® gets shipped to Spain where it is further processed into a leather like material, using a special process. It gives Piñatex® the feel surface and durability of leather. This is the final step and then the material which is packed in rolls gets delivered directly to exclusive designer and brands like us.

The manufacturing process of Pinatex does not only reduce waist but it also creates and extra income source for the pineapple farmers in the philippines. Normally farmers would have to rely on seasonal harvest but being part of the anufacturing process of pinatex allow them to have a second source of income. Additionally they can use the leftover biomass to further fertilize their soil and improve their plantation.

During the manufacturing process of conventional leather called tanning over 250 different toxic heavy metals and chemicals are used such as aldehyde, cyanide and lead. This substances are very harmful to the health of workers as well as the environment.

Other alternatives are like PU or PVS leather or not significantly better either. Both cause a lot of damage to the environment during the manufacturing process and are hard to dispose.

On the other hand Piñatex® uses no heavy metals, chemicals or toxix substances that could potentially harm the environment, animals or the people that process it. It takes way less water and other ressources and the overall environmental impact is way better.

Compared to animal leather or synthetic leather (i.e PU leather) pineapple leather is way more sustainable and eco friendly. CO2 emission are way less and the environmental impact is far smaller than compared to conventional leather. This is partly due to the fact that pineapple leaves get recycled but also because the animal and synthetic leather manufacturing process require a lot of chemicals and other harmful substances.

Beyond all that pinatex / pineapple leather is far more ethical. No animals or humans (sad that we have to mention that) are harmed during the manufacturing process.

More and more brands are getting aware of this ongoing trend of sustainability. They understand the need for more sustainable options and starting to offer many alternatives to leather. Since Pinatex is so versatile it can be used for almost any piece of fashion starting from small watch straps to big jackets. Nowadays there are a bunch of vegan leather products and big Brands such as Hugo Boss and Puma have already started using this fabric to reduce their environmental impact.

In the near future a lot more brands will be using materials that are better for the environment including Pinatex. Also the automotive industry starts using Piñatex for their leather seats and interior decoration. Products like wallets, bags, watches, shoes, jackets and much more are already available. Here are some Piñatex products everybody should have seen at least once.

Probably the hardest durability test when it comes to leather fabrics are shoes and boots. If the material stands this test then you can probably use it for any fashion item. Well Hugo Boss and Puma put it to the test and both released their new trainer collection made with pineapple leather. The result speaks for itself. Available in multiple colors and sizes perfect for a casual outfit.

Wallets are probably the accessoire that gets from leather the most. But that can be easily swapped for Pinatex like some brands have already shown it. The Spain Brand MARAVILLAS BAGS by Designer Cristina Bussman feature a very wide range of pinatex wallets. All of them are hand made and eco friendly sourced in Mallorca, Spain.

But they also feature a great variety of bags, including back bags and gym bags for women as well as men. They are all available in multiple colors and definitely look fancy. Even the black notebook bag looks very unique and stylish.

What’s cooler than a leather jacket? That’s right a pineapple leather jacket. Not many brands have tried to make jackets but one definitely nailed it. Altiir is high class fashion label making exclusive design with the highest quality possible. They set really high standards for biker & rock n roll styled leather jackets. Not only when it comes to style but also sustainability. After testing different vegan materials we liked pineapple leather by far the most.

More importantly because it is not only vegan but also eco friendly. Those two aspects are part of the core values of our brand. Vegan does not necessarily mean eco friendly. But they are equally important and pineapple leather meets both criteria.

Secondly because it just looks and feels awesome. PU Leather feels like plastic and does not fit our premium style. It also smeels cheap and does not feel great on skin. Pinatex on the other hand feels great on the skin, has great texture and looks fantastic. Currently we offer 6 different colors:

for 12 different models in 3 collections – the First Season, Day-Date Season & Automatic Season. On top of that all our watches are made by hand in Germany and run with a Swiss movement.

When it comes to vegan watches DAN & MÉZ is the clear number 1. Combining highest quality with a timeless, unique design.

We are currently working on new collections but since all of them are handmade it takes time to do so.

Currently there are not many manufacturers on the market offering pineapple leather. Ananas Anam was the first company to offer pineapple leather called pinatex. To this day they are the leading company on the market right now. The company is based in central London but operating and shipping worldwide. For more information contact them directly.

Pinatex ist definitely one of the most promising vegan leather fabrics on the market right now. There are already quite a few big sustainable clothing brands using it successfully for various products. Because of the little impact on the environment, as well as the great durability, we from DAN & MÉZ also decided to for pineapple leather. 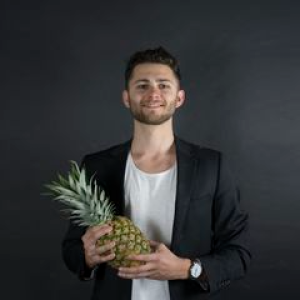 Get the latest updates on sustainable vegan fashion.

5 thoughts on “Pinatex – Pineapple Leather The Fabric of the Future”

If you are under 16 and wish to give consent to optional services, you must ask your legal guardians for permission. We use cookies and other technologies on our website. Some of them are essential, while others help us to improve this website and your experience. Personal data may be processed (e.g. IP addresses), for example for personalized ads and content or ad and content measurement. You can find more information about the use of your data in our privacy policy. Here you will find an overview of all cookies used. You can give your consent to whole categories or display further information and select certain cookies.

Accept all Save Preference & Close Accept only essential cookies